Shortly after September 11th, 2001 (“9/11”), High School graduate Bronson Bailey resolved to defend our nation from terrorism. He immediately enlisted in the United States Marine Corps where he was assigned to the 1st Light Armored Reconnaissance Battalion, First Marine Division, I Marine Expeditionary Force, Fleet Marine Force. He was a tough, top-performing Marine among Marines, and was deployed to fight in the Iraqi theater of operations (Operation Iraqi Freedom) against the regular Iraqi forces as well as terrorists and insurgents. He served heroically in the face of constant mortal danger before redeploying back to California at Camp Pendleton.

His experiences there were not without consequences, and the fighting and loss of comrades left him with deep depressions that deprived him of sleep and daytime focus (Post Traumatic Stress Disorder, or “PTSD”). Nevertheless, he was a good Marine and remained deployable.

On Bronson’s second combat tour, he experienced more traumatic stress with the loss of life around him. Although he was now diagnosed with severe PTSD and ineligible for further deployment, this was not to be his final combat engagement.

His third combat tour took him to Afghanistan, and it was there that the toll of his previous traumatic stress experiences became more apparent. He served well and faithfully, yet experienced a traumatic brain injury. In spite of the challenges, Bronson sought help. 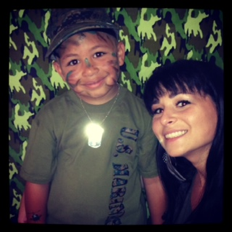 In Camp Pendleton, Bronson Bailey was a Wounded Warrior and checked into the Wounded Warrior Hope and Treatment Center. Although severely wounded, his injuries were not visible such as a large scar or missing limb. Therefore, he was not accorded with the respect or legitimacy of a Marine whose wounds could be easily seen. His command denied him access to treatment. Sadly, this is part of a trend and a larger story in today’s military.

Finally, in October 2013, Bronson was abruptly discharged from active duty with a General Discharge under Honorable Conditions. He, his wife Nicole and five-year-old son Jaiden were no longer allowed to live in their three bedroom home on the Northern side of Camp Pendleton, and with no time for planning or transition, Bronson was shoved aside into the civilian world with no previous experience in it. 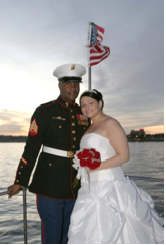 Today, the Bailey Family is struggling to make ends meet and set to live in a one bedroom apartment starting March 1st. Bronson is working part time while Nicole works full time, and both are doing their best to raise their son and send him each day to kindergarten. They have become active locally, and Bronson has joined the American Legion Post 281, having just marched in the Laguna Niguel Annual Holiday Parade. The family is a positive influence on the community, and was recognized last month by the Laguna Niguel City Council with a “Welcome Home” plaque for Bronson.

The story is set for a happy ending, except that they need to post the first month’s rent for the apartment into which they are moving and are short the funds. Once in, they are set and stable. Presently, however, the move represents a financial leap that they cannot make.

As a grateful community, I would hope that we could each spare enough to enable this wonderful family, which has endured so much for all of us, to have the simple peace of mind that they deserve.

I hope that we could donate generously to “The Bailey Family Fund”, and begin to restore the well-earned dignity of this Marine Hero and his small family.